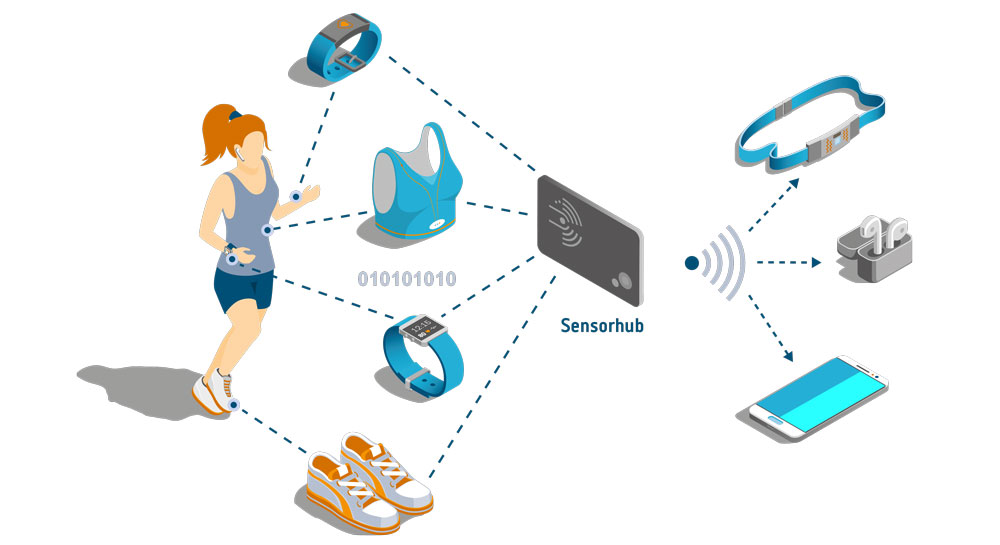 Sport is about efficient execution of movement for encouragement.In order to support this digitally with the help of sensors, Salzburg Research and partners developed the “SensorHub”, a distributed sensor platform for setting up so-called Body Sensor Networks.

Whether running, skiing or cycling – sport is about efficient execution of movement. This is how athletes achieve the greatest possible success in terms of both performance and fun. A digital recording and evaluation of movement data contributes more and more to efficient and therefore less risk of injury. Based on this data, hobby and professional athletes can improve their movement sequences and enjoy the sport even more in the future.

In order to be able to digitally evaluate the movements and emotions of athletes, the extensive use of sensors during sports is essential. The data from these sensors on the sports equipment or on the body must be transmitted in a synchronized manner. For this purpose, Salzburg Research, in cooperation with the University of Salzburg and the company Digital Elektronik, developed the “SensorHub”, a distributed sensor platform for setting up so-called Body Sensor Networks.

The aim of the SensorHub is an optimal interaction of different sensors and their data transmission. The integration of sensor hardware and algorithms is accelerated and the use of a wide variety of sensors for recording data close to the body is simplified. The hub’s generic interfaces allow rapid prototyping of sensors, algorithms and feedback modalities. This means that data is quickly recorded and passed on to connected devices such as a smartphone and can be accessed by the athlete.

Salzburg Research has now developed the “SensorHub” as part of the COMET project “Digital Motion in Sports, Fitness and Well-being” in cooperation with the University of Salzburg and the company Digital Elektronik.

For wireless communication between the individual devices in the sensor network, a new way was chosen with the ESP-Now protocol. One device takes on the task of the central “SensorHub Central Unit”, which manages the network consisting of all sensors. It also takes care of the automatic time synchronization of the connected devices by regularly updating the time base of the devices in the network. This compensates for any possible drift. Up to nine other devices, so-called “SensorHub Units”, can then send their sensor data at the same time and with time synchronization.

An inertial sensor consisting of an accelerometer and gyroscope is integrated in each device. In addition, each device offers an I2C interface as well as a direct analog or digital interface for connecting external sensor hardware.

The collected measurement data are recorded on the device and transmitted to the central unit via the radio interface. The central unit forwards the data in real time and wirelessly via WLAN / TCP to connected devices such as laptops or smartphones. There is also the option of saving the data on the internal SD card and ejecting it later.

Salzburg Research has restructured the system and made it expandable. This means that external systems such as pressure sensors can now be integrated. In addition, the connection to new sensors was implemented.

With the created basis – a network for the simple, prototypical integration of new sensors – the next step is to record different physiological parameters such as step or breathing frequency, through which the integration of different textile sensors – for example for pressure – should take place. In the future, the software is to be further optimized and the hardware is to be increasingly made smaller.


Our customers about us

Digital aids are an important part of product development nowadays. Especially in high-performance sports, it is necessary to know all the technical correlations in detail. Whether it's in the shoe, the ski or the helmet - there are loads everywhere that have to be measured and then analysed. And the end consumers also want to know more about their riding behaviour. Together with Salzburg Research, we are researching how skiing can become safer and more efficient. 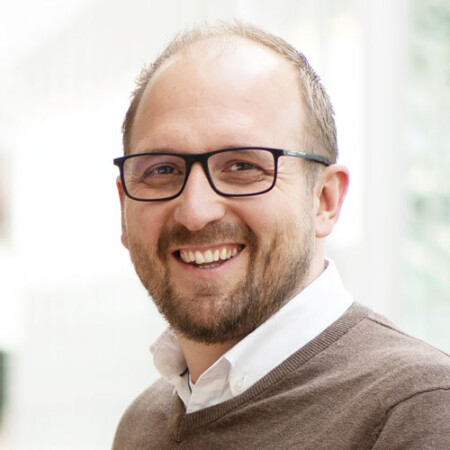 We spend a third of our lives in bed. This time should be used in the best possible way: on the one hand, to provide the body with the best mechanical conditions for undisturbed sleep. But also to obtain information that makes efficient health care possible. Together with Salzburg Research and the Center for Cognitive Neuroscience at the University of Salzburg, we are conducting research in this area. The results of the research work will flow into a new generation of mattresses.

Data-based visit management including sustainable steering measures is a challenging task for smart destination management. The Corona pandemic has only partially shifted the nature of the challenges. The complexity of guest flow analyses and control measures is high and our cooperation with Salzburg Research is correspondingly profitable here - for the benefit of tourism businesses, for an increased quality of experience for tourists and an overall sustainable acceptance of the tourism industry by locals.

keep up the good work!

In order to master the transformation to a sustainable, climate-neutral and inclusive mobility and transport system in urban and rural areas in Austria by 2040, knowledge and competence hubs are needed at the interface between research and practice. Salzburg Research has a central role to play in the Austrian innovation ecosystem: it drives research projects that play a significant role in shaping the mobility system, both on the supply and demand side, and thus acts as an important alliance partner of the BMK in its role as an RTI policy driver.

Collective Perception" is an innovative safety service for connected vehicles. Through the cooperative detection of collision risks and the exchange of safety-relevant information through vehicle-to-x communication, it protects vulnerable road users in particular. Through the cooperation with Salzburg Research, we can test and evaluate this pioneering service in a real environment with scientific support and thus bring it to market maturity more quickly. 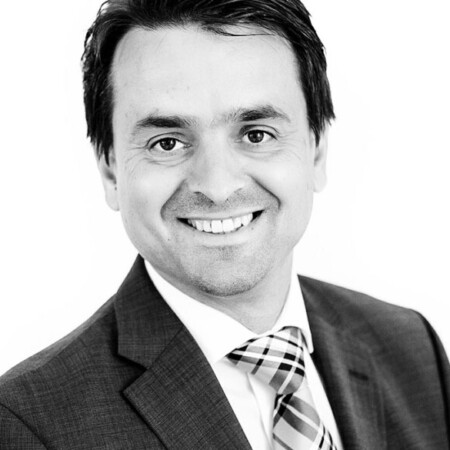 With the independent technical and content-related expertise of Salzburg Research, the province of Styria was able to make a well-founded decision in the award procedure. Thus, in accordance with the best bidder principle, a contractor was awarded the contract who - as we are now convinced - will implement the project in a high quality and professional manner. It is very pleasing that the Regional Administrative Court also confirmed the substantive argumentation in a review procedure and judged the award procedure to be correct.

Machine-learning methods offer new approaches for health-oriented research, gamification and digital "nudges" motivate not only the "digital generation". Integrating the user group at an early stage, involving stakeholders, transferring open innovation methods from business to science are, for me, future-oriented approaches in prevention. Salzburg Research offers this competence and has integrated the knowledge transfer "from Lab to the Field", which is so important for me, into the heart of the corporate strategy.

Creating reliable networks has been TTTech's technical focus since our founding in 1998. Our secure networked computing platforms enable megatrends such as the Internet of Things and autonomous mobility to become a reality. But also on a human level, our progress is based on reliable networks: Research cooperations, such as with Salzburg Research, enable us to jointly develop and test the technologies of the future and thus make them usable for the benefit of all people.

A dynamic team, friendly with great competences: I recommend!

The energy transition brings numerous challenges for us as grid operators. In order to optimise electricity distribution, we also want to use information that was previously inaccessible to us. All the information provided to us by customers and various stakeholders helps us to make our operations more efficient and thus actively promote the energy transition. With Salzburg Research, we have a competent partner at our side who supports us with communication solutions, system and data analyses. 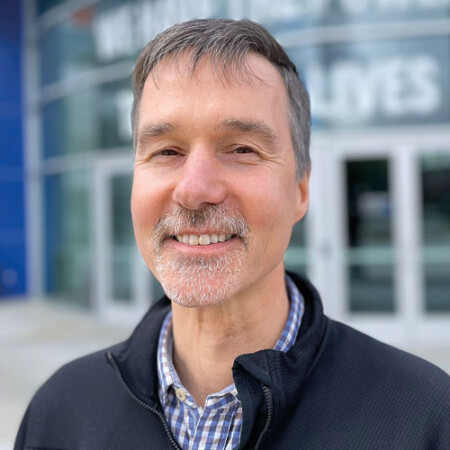 For adidas, "user experience" is at the heart of the innovation strategy. A scientifically sound understanding is a prerequisite for developing innovative products and services. In our research work with Salzburg Research, we have access to both technical and sports science know-how. Together we develop prototypes and test them with consumers in a real-life application environment.

Salzburg Research is an important cooperation partner for Digitrans in the area of safety for all road users and the mobility of the future. We are very happy to make the Digitrans test centre for automated vehicles and the test vehicles available and benefit significantly from the mutual experiences from public transport and logistics use cases and connected driving. The projects of Salzburg Research make a significant contribution to avoiding accidents.

As a software company with a focus on Bio-IoT, we collaborate with Salzburg Research on several research projects. Fast and secure data streaming with the lowest possible latency plays an essential role in many of our ABIOS solutions. Together we can improve existing communication technologies, make them future-proof and expand them for new AI application areas and digital solutions.

The clear trend from on-premise solutions to cloud solutions, the improved 4G/5G infrastructure and the increasing use of smartphones show that wireless networking is becoming more and more important. Commend's solutions, including emergency communications, need a very reliable and highly secure network. Our focus is on the accurate and uninterrupted availability of our systems and services. Salzburg Research is an important and long-standing partner in this regard. We at Commend appreciate the institute very much for the unique and valuable joint work, as well as the unparalleled expertise.