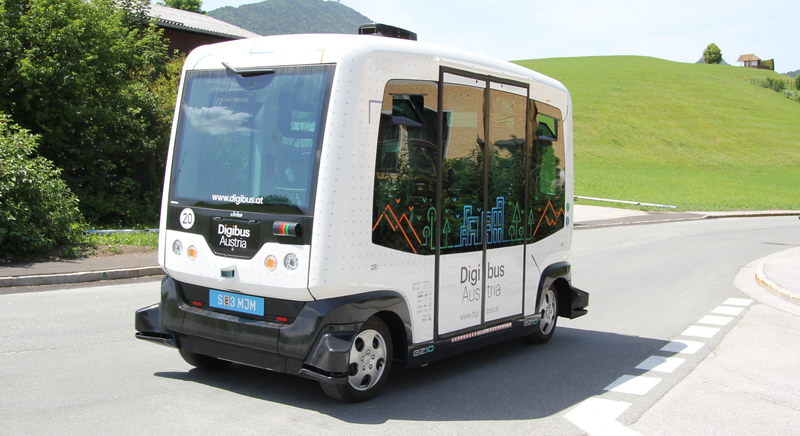 In the Austrian lead project „Digibus Austria“, a top-class consortium led by the Salzburg Research Forschungsgesellschaft researches and tests the reliable and safe operation of automated minibuses in public transport. Independence and driving safety of autonomous vehicles should be further improved.

Self-driving minibuses could be used in local passenger transport in the future as a donor and as a transferor to intermodal mobility nodes or to the development of local centers. A first 7-month test run in Salzburg in 2017 revealed the limitations and challenges of self-driving vehicles (see: Digibus 2017: Experiences with the first self-driving shuttle bus on public roads in Austria). The new Austrian flagship project “Digibus® Austria” will develop and test methods, technologies and models for the reliable and safe operation of automated vehicles over the next three years in order to further improve the autonomy and driving safety of such vehicles.

More and more test attempts are announced or carried out worldwide. Only a few test attempts aim at a systematic further development of automated minibuses in the direction of higher automation levels. Currently, the self-driving minibuses in mixed traffic just meet automation level 2 (partial automation). In the lead project, level 3 (conditional automation, intervention only when needed) is targeted and level 4 (high automation) prepared. In addition, methods of environmental and passenger interaction as well as integration into regional, intermodal mobility system are being researched and tested.

All methods, technologies and models are tested in the “Digibus® Austria” project on one non-public and two public, regional test tracks in Salzburg and Lower Austria. Testing on public roads will help test specifically developed concepts for interacting with passengers and other road users. A trained operator will be on board for all test drives on public routes. On non-public routes, the bus will handle different driving scenarios completely autonomously. As a test vehicle, the model EZ10 of the French manufacturer EasyMile is available. The flagship project “Digibus® Austria” runs from April 2018 to March 2021 and is funded by the Federal Ministry of Transport, Innovation and Technology within the framework of the research program “Mobility of the Future”.