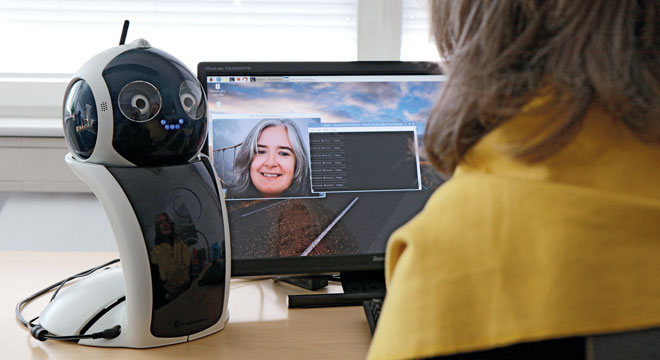 Over the past 34 months, Salzburg Research, together with MOVES – Centre for Gender and Diversity and Johanniter Austria, researched the possible use of social robots as a support for people over 50 or with a chronic disease, such as diabetes. A special focus was placed on gender-sensitive interaction. The results were presented in a webinar at the end of August 2021.

Social robots can be a valuable support for people over 50 and/or with a chronic illness. Compared to classic smartphone apps or web applications, they enable a more “natural interaction” between humans and machines. Social robots are also proactive: they can actively address users and also recognise emotions from speech or facial expressions. By integrating other wearables, such as a smartwatch, data on stress and sleep can also be collected. The social robot can then recommend appropriate tips.

Do people over 50 or people with diabetes experience interaction with a social robot as helpful? The prototype was repeatedly presented to potential beneficiaries. The feedback and other wishes from the two target groups were incorporated into further developments. For example, the users found it difficult to recognise when the robot was ready to pick up. Therefore, the robot’s “nose” was established as a visual sign: whenever it lights up green, the robot is listening.

Almost two thirds of the interviewees experienced the interaction with the social robot as playful and found it fun. However, it was criticised that the interaction did not come close to a real conversation.

The more intuitive “Sascha” is to operate, the more socially active the robot is perceived to be. The observation protocol also showed that the test subjects themselves also behaved as they would with a social counterpart. For example, they greeted the robot or reacted to a suggestion by nodding. Some test subjects were “too polite” and said please and thank you – which the robot did not understand. Communication via commands alone was irritating for some test subjects.

The majority of the respondents (87%) feel relatively safe with the idea of being alone with the robot. There are minor concerns about a feeling of surveillance (21.7%) and privacy (17.4%).

Feedback from both users and experts indicated that personal self-determination and freedom of choice must be guaranteed.

In the design of robots, special attention must be paid to gender stereotypes. These should neither consciously nor unconsciously be transferred to new technologies. Users and experts agreed: no gender-specific differences were perceived in the social robot “Sascha”. Individual preferences can be set through the individualisability. It was interesting that some seniors would like to follow stereotypes in their everyday life

Possible areas of application for a social robot

The following possible applications for social robots were mentioned by users as well as experts:

The social robot Q.be One

The social robot Q.bo One was used in the project. It has, among other things, open-source hardware and software, 21 LEDs to display “mouth and nose”, two HD cameras as “eyes”, a unidirectional microphone as “ear”, 82dB speakers for sound output, WiFi and Bluetooth for connectivity, two servo motors for head movement and three touch sensors for further interaction. In the course of the project, it was expanded with 3D-printed “hands” as a holder for an additional tablet, a mobile base and improved German-language speech software.

The following functions were realised on the social robot: