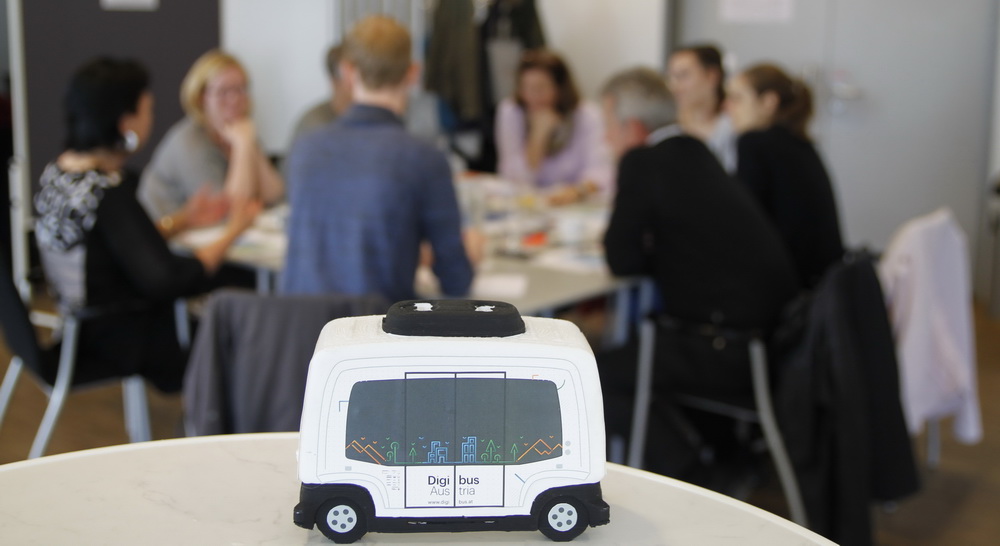 This was the Citizen Debate on Automated Mobility in Salzburg

For a day, citizens discussed ways in which automated mobility could change our lives. Austria, together with Aachen in Germany, was the first country to hold this globally organized, public debate. The participants not only had the opportunity to exchange views in an open atmosphere and hear different perspectives, but also to learn a lot about automated mobility in the five to six organized panels. Application and usage scenarios were also presented, as well as technical background, legal framework and the definitions of automation levels explained. The organizers were particularly impressed by how quickly the participants were able to immerse themselves in the topic and how actively and appreciatively they discussed it. By June 2019, more than ten other such debates will be conducted in cities across Europe, as well as North America and Singapore.

„Salzburg is a very congested country. Together with the citizens, we weigh the pros and cons of automated mobility in order to get the best out of Salzburg. We are well advised to actively participate in shaping such developments”, says Stefan Schnöll, Transport Councilor Land Salzburg.

First Results of the Debate in Austria

There is a Lot of Potential in Automated Mobility Solutions

In general, more than half of respondents to automated mobility are positive. Men are more likely to favour this technology than women (64% to 38%). This can be an indication that the different needs for new mobility solutions need to be queried in greater detail in order to be able to gain acceptance.

Another aspect in which the participants were largely in agreement revolves around the acceptance of the different levels of automation. While at Level 2 (semi-automated systems where drivers need to be in control of the vehicle at all times), 83.7% of respondents fully or more fully agreed to trust in automated systems and tests with driverless vehicles, and only 6.1% answered “Do not know/insecure”, at level 5 (fully automated driving under all conditions) there were only 44% left who agree fully or rather and 21.7% with “do not answer/unsure”.

“You get used to new technologies quickly. If something is released for the road, I assume it has been sufficiently tested before.”
Participant Salzburg

“If the individual mobility behaviour does not change, nothing is gained. Because if personal mobility is made even easier by individual automated systems, the traffic or space problems are not solved.”
Participant Salzburg

The fact that security plays a very important role for almost all participants has been reflected in several answers. Security was the most widely used term in terms of the hopes of automated mobility solutions. Regarding the concerns, confidence in the software as well as data security and privacy ranked among the most commonly used terms. Around 88 percent of respondents said that they did not or did not seem to be in the mood to sell passenger data generated from automated transport systems. You want to decide for yourself whether you want to sell data that is not required for the automated system to function. When it comes to urban traffic control centers having access to passenger data generated by automated transport systems, nearly 72% agreed fully or more. Here, the public interest is in the ofreground and the respondents trust that the information will not be misused.

A goal of the five venues and organizers in Vienna, Graz, Linz, Salzburg and Pörtschach was to be able to respond to regional peculiarities and to meet the needs of the local population. The feedback already showed during the event that both organizers and participants benefit from an open exchange like this.

“The topic hit me completely! As a visually impaired person, I place great hopes in the new technology and hope to be able to independently use a fully automated car.”
A participant in Linz

Next Steps and Detailed Result Analysis

All results were fed into a common database. The data will be evaluated anonymously after the conclustion of the discussion series and the results will be compared. The overall evaluation and interpretation of the results will be officially presented in the autumn of 2019 following the completion of all citizen dialogues.

About the Global Citizen Debate on Automated Mobilit

The Global Citizens Debate is an initiative of Mission Publiques, a consultancy specializing in participatory processes. AustriaTech – Federal Association for Technology Policy Measures GmbH, is the national coordinator of the Citizen Dialogue on Automated Mobility.

Partner of the Citizens Debate on Automated Mobility in Salzburg was the Province of Salzburg. It supports the use of innovative technologies that make the transport system more efficient and focus on sharing transport. Organizer of the Citizen Dialogue was the Salzburg Research Forschungsgesellschaft. Among other things, the research institute specializing in the Internet of Things tests autonomous minibuses in Salzburg and Lower Austria.