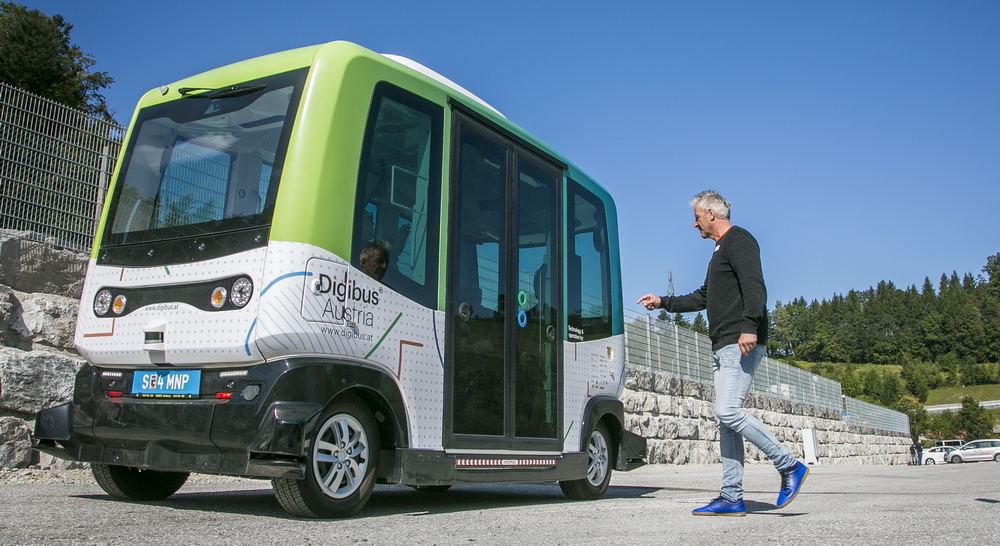 Austrian premiere: On September 19, 2019, the self-propelled Digibus® drove for the first time without an operator, only supervised by a supervisor in the control center. 16 volunteers participated in the scientific experiment of Salzburg Research.

You do not look for a steering wheel in the Digibus®, the automated minibus, in vain. In all test drives with self-driving vehicles on public roads is an obligatory operator on board, who can intervene at any time. For the first time ever, Salzburg Research sent the Digibus® at the Salzburgring alone on 19 September. A supervisor in a control center paid attention to safety. This is only the second driverless test worldwide with a self-propelled EasyMile shuttle.

The objective of the scientific study by Salzburg Research was to test the subjective sense of security of the test persons as well as the information and communication between the passengers and the driverless vehicle as well as with the control center. The subjects completed different test scenarios and were also confronted with unpleasant situations: in one scenario, they sat all alone in the self-propelled shuttle, in another with two, but with a groaning passenger. It also examined how the subjects organize when the masimum number of passengers is exceeded. Also a technical infirmity was simulated.

For research leader Karl Rehrl, another milestone in the lead project Digibus® Austria was achieved with the test drives: “In the long term, the hitherto legally required escort on the shuttle is to be replaced by monitoring in a control center. A supervisor could look after several self-propelled shuttles there. Before this is allowed by the legislature, there are still many questions to answer from the research. The driverless test drives provide important insights for further developments towards safe, driverless operation and communication between passengers and self-driving vehicles.”

The Subjects Felt Safe On the  Bus

After the test drives, the subjects were asked how confident they felt alone in the self-driving bus, what information they needed while driving, or how they responded when the shuttle did not work as expected.

First results: A good two-thirds of the subjects had no previous knowledge of automated driving or only heard about it. Almost all have never driven with an automated shuttle. Half of the respondents could imagine that an automated bus will replace the (second) car in the future.

In the simulated technical incident, about two-thirds of the test persons have contacted the control center. The subjective sense of security has fallen only slightly (56 percent felt very safe, 44 percent secure).

In the capacity test, when the maximum number of people on the bus was exceeded, 41 percent of the participants would prefer a pre-online seat reservation.

Nobody felt safe or insecure during all test scenarios.

In the Austrian flagship project “Digibus® Austria”, a top-class consortium under the direction of Salzburg Research is researching and testing the reliable and safe operation of automated minibuses in local public transport. Independence and driving safety of autonomous vehicles should be further improved. www.digibus.at